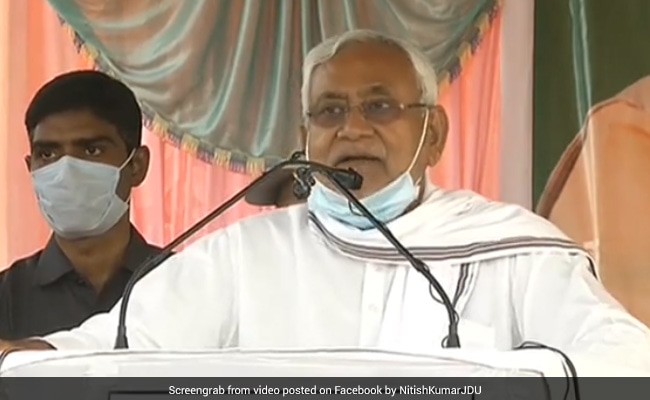 Nitish Kumar must thank the Shiv Sena if he retains the post of Bihar Chief Minister despite his JDU winning fewer seats than the BJP, Sanjay Raut said Tuesday evening in a swipe at his party’s former ally. Mr Raut said Mr Kumar should pay attention to what happened in Maharashtra in October last year and said his party had shown what happens when alliance partners do not keep their promise.

He was referring to the dramatic events that followed last year’s Assembly elections in Maharashtra, when the BJP and Shiv Sena fell out (spectacularly) after disagreements over power-sharing. The two contested the polls together and swept to victory, but the Sena later alleged that the BJP was refusing to honour its pre-poll promise of rotating the chief minister’s post.

“I have heard BJP leaders saying that only Nitish babu will be Chief Minister. Nitish babu should thank Shiv Sena for this. Not keeping promises will not happen in Bihar because the Shiv Sena has shown what can happen if word is not kept,” Mr Raut said.

“Hence, if Nitish Kumar becomes Bihar Chief Minister, despite winning fewer seats (as compared to the BJP), he should thank the Shiv Sena,” he added.

Trends at 7.30 PM showed the BJP-led NDA marginally ahead of the opposition mahagathbandan, which is led by Tejashwi Yadav and the RJD. The NDA is leading in 120 seats, while the opposition alliance is ahead in 115. The majority mark in the 243-member Assembly is 122.

Nitish Kumar’s JDU is, however, struggling. Faced with a strong anti-incumbency wave, the Chief Minister’s party is only ahead in 39 seats. The BJP, by contrast, is ahead in 73 and is set, for the first time, to be the big brother in its alliance with the JDU.

Mr Raut’s swipe was in reference to the fact that the BJP has repeatedly stressed that Nitish Kumar will remain Chief Minister should their alliance win the election.

Some reports say this promise will be met and Mr Kumar will remain Chief Minister regardless of his party’s or the BJP’s performance. Others, though, say that some BJP leaders feel Mr Kumar in no position to call the shots, particularly given the JDU’s weak showing.

The JDU, though, has made it clear – the BJP had given its word. The party also pointed out that without it, the BJP could not hope to get a majority in Bihar.

Mr Raut also praised opposition leader Tejashwi Yadav, who is the mahagathbandan‘s chief ministerial candidate and has, in the absence of notable help from the Congress, been active in campaigning.

Mr Yadav has exhibited “fighting spirit” despite contesting the election in a “hostile” situation, Sanjay Raut said, adding that polls had named him “man of the match”.

“The young leader fought against the Prime Minister, the Chief Minister and Union Ministers in such a hostile situation all alone and revolved the campaign around himself. The country and Bihar have got such a face in politics on whom we can rely,” he said.

Exit polls had given the opposition alliance victory in the Bihar election, but exit polls often get it wrong. Nevertheless, polls also showed that Mr Yadav was the preferred chief ministerial candidate of the people of Bihar.

With input from PTI